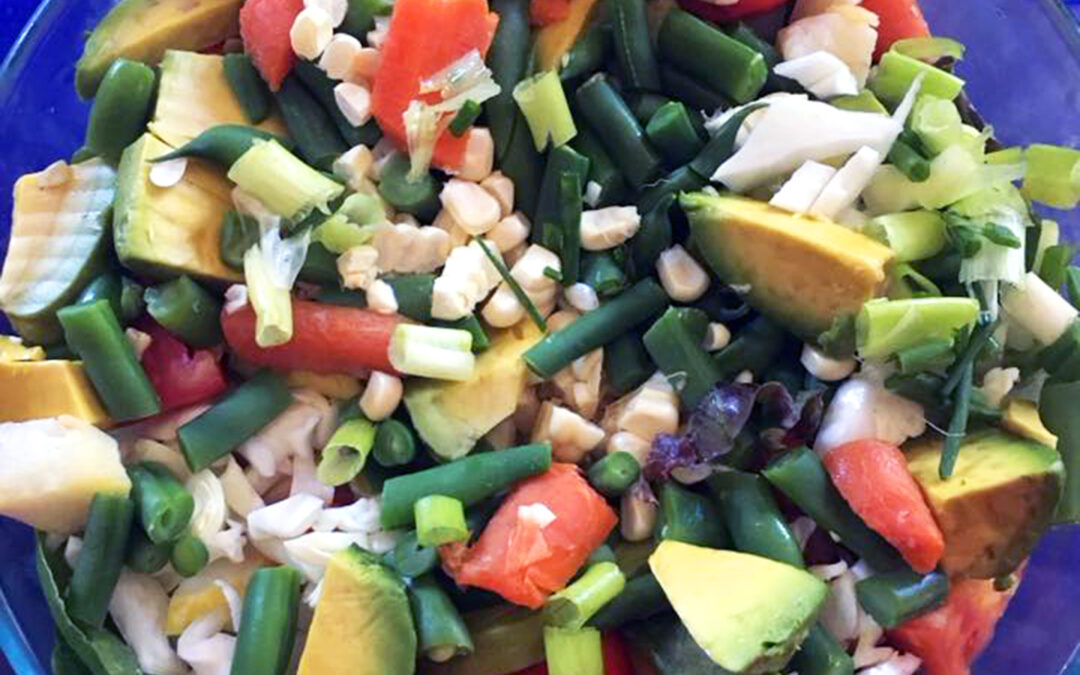 I would like to give you three compelling reasons to eat more plants and less animal based foods. The most common cause of death in the US and around the world is cardiovascular disease: Heart attacks and strokes caused by inflammation and cholesterol building up in our arteries. Someone dies in this country every 40 seconds of cardiovascular disease. And what is the #1 risk factor for death and disease worldwide? It used to be tobacco, but now it’s our diet! Americans eat more calories per day than any other nation in the world. And we spend the most money on health care: 1 ½ times what most westernized nations spend. We have a very big public health problem to solve. I’m hoping to give you some food for thought about how we might really tackle this public health dilemma.

Let me start out with a story: I was asked to assist a vascular surgeon on a case in the operating room. The patient had a severely clogged artery (not around his heart, but in his abdomen) and he was having a stent (like a Teflon straw) placed in the vessel after removing the fatty obstruction. As we were pulling what actually looked like a wad of chewed chewing gum from this man’s artery, I said, “Doctor, look! This is why you should be telling your patients to eat a plant based diet!” And he said, “See, this is why I shouldn’t!” Now let me give you 3 reasons to eat more plants and less animal products because, sadly, you probably won’t hear this from your own doctor any time soon.

You could shower for 2 months with the amount of water it takes to produce one hamburger! Everybody poops, right? The manure produced by animals raised for food must be stored, usually in vast toxic lagoons. When there is flooding, the resulting contamination of our waterways contributes, along with nitrogen fertilizer run off, to huge dead zones where nothing can live. There is a huge dead zone in the Gulf of Mexico, the size of New Jersey. For every gallon of milk there is 2 gallons of manure produced. In North Carolina, there is more farm animal waste than human waste! Eating legumes and grains directly, instead of cycling them through an animal, would greatly reduce our carbon footprint and go a long way to halting climate change. View Link

There are also ethical issues raised when talking about eating animals versus plants. When I was young, I had a dog whom I loved and dressed up in doll clothes and carried around like a baby. Yet I made no connection between my pet and the Spam, burgers and fried chicken that I ate daily. I was taught, like almost everyone else, to make a distinction, mostly unconsciously, between the animals we eat or wear, and the animals we love as companions. This is called Carnism and it allows otherwise perfectly ethical people to participate in an industry that is filled with horrific abuse. Consider that pigs have the intellectual problem-solving capacity greater than that of a human toddler. I know this is very difficult to acknowledge, but we all owe a debt of gratitude to the brave folks who go undercover to shine a light on the reality of factory farms. And 95% of the meat you eat comes from factory farms. Here is information about Carnism if you are interested in learning more.

I became vegan after watching a Farm Sanctuary video narrated by Steve-O.

It’s hard for some to watch, but consider how hard it is for the billions of animals who suffer every minute of their artificially shortened lives. I also watched a video of a cow marching along a curved walkway towards the place where he would be stunned (hopefully) by a bolt through his skull, before being slaughtered. The video captures this desperate animal trying to turn his body around to avoid following the cow in front of him. This may actually be one of the better designed slaughterhouses. Still, I challenge anyone to watch this and not feel empathy for the doomed animal. You can watch it here.

When I am confronted by a person who is encouraging me to eat an animal, or by a delicious looking food that contains animal products, I think back on these videos and others, and remember why I have decided to live a vegan life. And I don’t ever feel deprived, and neither will you!

Lastly, the third reason to eat more plants is for your own health. Vegans live 6-9 years longer than meat eaters. Our #1 killer, heart disease, can be prevented, treated and even reversed with a plant based diet. Heart disease starts early, even in the womb, and is affected by your mother’s diet. We know from autopsies of soldiers, that 20 year olds have significant plaque building up in the walls of their arteries. What’s incredible is that Nathan Pritikin was able to reverse heart disease in the 1970’s; Dr. Dean Ornish published his landmark Lifestyle Heart Trial in The Lancet in 1990; And Dr. Caldwell Esselstyn, Jr. more recently published data showingthat arterial plaque disappears and arteries open up on a whole food plant based diet. This is not just a vegan diet, full of processed food, salt, sugar and oil. A diet consisting of whole plant foods has the power to save lives from heart disease: Keeping our blood vessels open, lowering blood pressure, and preventing heart attacks and strokes. Prevention is really key and our Academy of Nutrition and Dietetics (AND), has a position statement on the safety and effectiveness of well-planned vegan diets, for people all ages.

Another dreaded disease is type 2 diabetes. With the absolute epidemic of obesity in this country, we are now seeing children with high blood pressure, as well as type 2 diabetes. Two out of three Americans are either pre-diabetic or diabetic. And, again, this has been shown to be prevented, treated and often reversed with a plant based diet. Compared with the traditional ADA diet (restricted carbohydrates), Neal Barnard, MD was able to show that a low-fat vegan diet, was superior in reducing hemoglobin A1C (a measure of the average blood glucose over 90 days) and keeping it down.

Animal foods contain naturally occurring trans fats, and we know that this is a risk factor for both cardiovascular disease as well as type 2 diabetes. People need to know that fat is the cause of diabetes, not carbohydrates. I understand that this seems to go against everything you have ever learned, but it is true: The fat inside your muscle cells, called Intramyocellular Lipid, interferes with the insulin receptors on the cell (this is insulin resistance). You can imagine the fat clogging up the insulin receptors like gum in a lock. When the fat you wear, or the fat you eat, blocks the insulin receptors, the glucose cannot get into the cells to be burned for fuel. Instead it builds up in your blood, eventually causing fat to be stored first in your liver and finally in your pancreas, destroying the insulin secreting cells. Type 2 Diabetes is a major cause of blindness, kidney failure, and amputations; And the insulin that you eventually need to take by injection, increases the risk of cancer. This is not a trivial disease. And it is occurring now in children. At a recent plant based nutrition medical conference I attended, I spoke to a doctor from northwestern Canada, who reported to me that she has seen teenagers requiring amputations due to uncontrolled type 2 diabetes. Can you even imagine this happening to anyone you love?

Most of us know someone with cancer. Both of my parents, as well as all of my uncles died of cancer. Vegans have half the risk of cancer compared to meat eaters. There are many reasons for this: Animal based foods contain many carcinogens, like heme iron, Neu5Gc, and nitrosamines. Certain amino acids found predominately in meat, like methionine, encourage cancers to grow. Animal protein increases IGF-1 (insulin-like growth factor-1) that increases cancer growth. Carnitine and choline in meat dairy are turned into trimethylamine (TMA) by the gut flora of omnivores. TMA is oxidized in the liver to TMAO (Trimethylamine-N-Oxide), and this compound is atherogenic (causing LDL-cholesterol to be deposited under the arterial vessel wall), as well as highly inflammatory and associated with advanced cancers, metabolic syndrome and death. Even the way that we cook meat increases its potential carcinogenicity: When meat is cooked at high temperatures, when grilled, for example, carcinogenic Heterocyclic Amines and Polycyclic Aromatic Hydrocarbons are produced. The World Health Organization now lists processed meat as a group 1 carcinogen (the same designation it gives to tobacco and asbestos), and all red meat is a probable carcinogen. Pesticides, heavy metals and other chemical residues and bacterial endotoxins are all found in the meat and fish that we eat, and they all negatively impact our physical and mental health.

Dairy itself is associated with certain cancers, especially prostate cancer. Dean Ornish, MD has been conducting research on diet and lifestyle changes affecting the progression of prostate cancer and his work is ongoing and very exciting. The changes that can be seen in gene expression on plant based diets, specifically with regard to cancer promoting and cancer suppressing genes, are extraordinary.

And while there are many reasons to avoid animal products, there are also a few very good reasons to eat lots of plants. Plant foods are our only sources of fiber. Fiber, found in fruit, vegetables, whole grains and legumes is an important food for our healthy gut bacteria. These fiber-munching bacteria make short-chain fatty acids, like acetate and butyrate, that protect the gut lining, reduce inflammation, and protect us from colon cancer. Short-chain fatty acids are involved with mineral absorption and metabolism. Did you know that your gut microbiota is at least partly responsible for body fatness? If you change your diet, you alter your microbial species living in and on every part of your body. And if you eat a diet centered around whole plant foods, you will be promoting (by feeding) the healthiest gut bacteria and suppressing the harmful bacteria, that can do you no good at all.

Plants are full of antioxidants, phytonutrients, and plant stanols and sterols (these lower our cholesterol). Antioxidants heal the DNA damage from other chemicals and just normal daily metabolic reactions. Phytonutrients have numerous beneficial effects for humans. You might appreciate seeing this list from Brenda Davis’ wonderful book, Becoming Vegan

8.  Modulation of cell-signaling pathways, which regulate the growth, division, and death of cells

9.  Prevention of macular degeneration and cataracts

Now, it shouldn’t be a surprise to anyone, that plant based eaters suffer lower rates of just about any chronic disease you can name, from Alzheimer’s to Crohn’s.

There you have it! Three solid reasons to eat more plants and less animal products. You’ll be improving your health, lowering your carbon footprint and reducing animal suffering. I would argue that we are only going to be able to feed and care for the 10 billion humans expected by 2050, if we all move towards a plant based diet. Are you convinced yet? Is it at least starting to seem less extreme? I certainly hope so. And I am always excited and honored to help you learn to love eating a plant based diet.

This site uses Akismet to reduce spam. Learn how your comment data is processed.